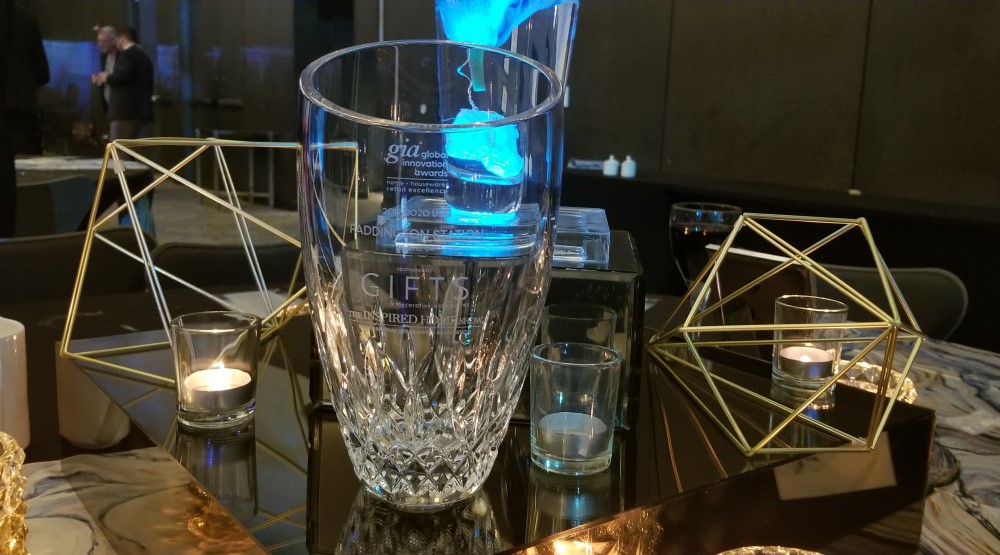 National winners were given a crystal vase.

In an evening gala that celebrated excellence around the globe, two US retailers received recognition for their success and innovation. The Global Innovation Awards (gia), hosted by the Inspired Home Show and the International Housewares Association (IHA), finally returned on Saturday, March 5, after a two-year hiatus and the result was a cheerful, vibrant and celebratory gathering of retailers, product designers and industry professionals.

Included in the long list of honorees from around the world were the Paddington Station in Ashland, Ore. and the Butler’s Pantry in Escalon, Calif.

Co-owners of the Paddington Family of Stores. Unfortunately, a representative could not attend the ceremony.

Nominated by Gifts & Decorative Accessories for a national gia award, the Paddington Station is a family run business that offers customers all the charm of a classic general store with the style of a gift and accessories boutique. The brand is 50 years old and offers its town an electric retail experience, but what really caught the GDA editors’ attention were the store owners’ green initiatives and dedication to setting better sustainable standards.

“I really admired what co-owners Pam Hammond and Kelly Jean Cooney were doing, not just for the future of retail but for our planet, too,” said Lenise Willis, editor in chief of GDA. “Not only were they working with their vendors to reduce packaging waste and were ahead of the curve in asking customers not to use plastic shopping bags, but they also installed solar panels at the store. It’s clear how passionate this mother-daughter duo is about their store, their town and their responsibility as a business.”

In recognition of its innovation in retail, the Paddington Station was awarded with a gia award for the U.S.

Jamie Butler, owner of the Butler’s Pantry, sits in the front row, second from right.

Nominated for a national gia award, the Butler’s Pantry earned not only a gia award for the U.S., but was also named a global honoree. The store has a unique origin story, beginning not as an online store or a brick-and-mortar but as a mobile store — run out of a  truck that gained notoriety at the local farmer’s markets. Owner Jamie Butler is a high-energy inspiration that continues to strive for more and propel the business forward; the small brand has grown into multiple brick-and-mortar locations with a café addition opening soon this year.

Both Paddington Station and the Butler’s Pantry were nominated for the 2020 gia celebration, however, the ceremony was postponed due to COVID-19 concerns and the cancellation of the last two Inspired Home Shows. This year, however, product designers and retailers from around the globe finally joined together to celebrate each other’s accomplishments and the reopening of the housewares show.