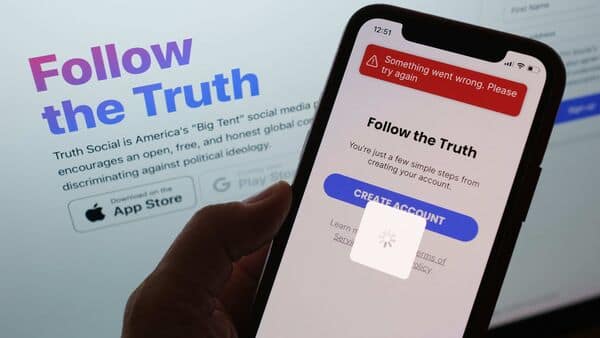 Donald Trump’s social-networking platform, Truth Social, has gone live in the U.S., but some would-be users reported being unable to create an account or received error messages when trying to do so. Others were prompted to join a wait list.

Trump Media & Technology Group, the company Mr. Trump set up shortly after leaving office in 2021, didn’t immediately respond to a request for comment.

Shares of Digital World Acquisition Corp., the blank-check company that is merging with Trump Media & Technology Group, jumped 19% in premarket trading on Tuesday. Traders have struggled in recent months to place a consistent value on Mr. Trump’s social-media venture, a business that has offered few details but one that supporters think is destined to take off.

Mr. Trump’s son, Donald Jr., last week tweeted what appeared to be the former president’s first post on Truth Social. “Get Ready! Your favorite President will see you soon!” it said.

In December, Trump Media & Technology Group named former Republican Rep. Devin Nunes, a longtime ally of Mr. Trump, as chief executive of the social-media venture. “By the end of March we’re going to be fully operational, at least within the United States,” Mr. Nunes said Sunday on Fox News.

While he was in the White House, Mr. Trump relied heavily on social media to communicate with his supporters, often bypassing his advisers and traditional media by posting straight to Twitter.

Twitter Inc. banned Mr. Trump’s personal account in January 2021, citing the risk of further incitement of violence following the attack on the U.S. Capitol by a mob of his followers just days before. Facebook Inc. also suspended him after the riot, and Alphabet Inc.’s Google suspended from its app store the social-media app Parler, which some Trump supporters and other conservatives had flocked to, saying the service had violated its policies. Applethreatened to do the same.

Across the platforms, Mr. Trump had amassed approximately 150 million followers—including 35 million on Facebook and 88 million on Twitter—which put him among the most-watched world leaders on social media.

“After close review of recent Tweets from the @realDonaldTrump account and the context around them—specifically how they are being received and interpreted on and off Twitter—we have permanently suspended the account due to the risk of further incitement of violence,” Twitter said in a blog post at the time.

In the wake of the Capitol attack, many people have expressed alarm at the role tech platforms played in spreading Mr. Trump’s unsubstantiated claims that the 2020 presidential election was stolen and disseminating the angry calls by his followers to take action in response.

The bans have become a rallying call among the former president’s supporters, and he often references censorship and freedom of speech at his rallies.