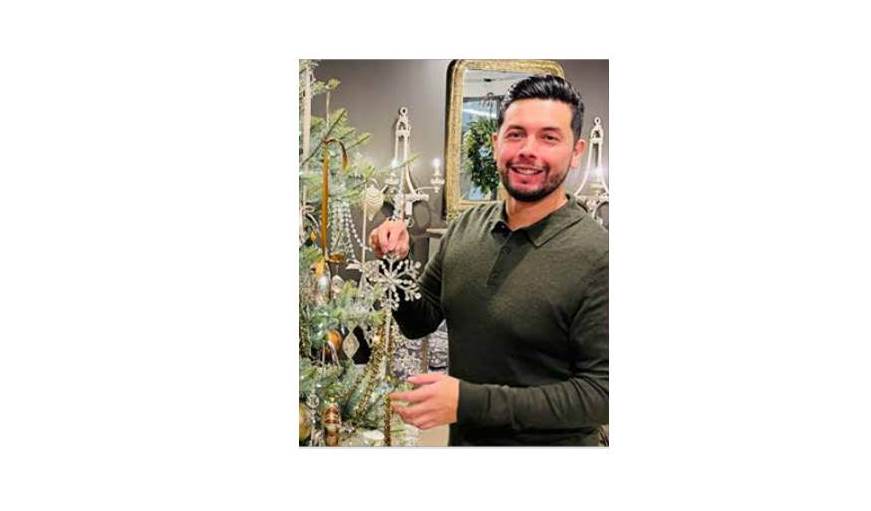 Christian Rebollo excels at creating festive atmospheres for showrooms, retailers, restaurants and people’s homes (he decorated multiple Christmas trees for actress Busy Philipps’ home last year). As a designer and brand ambassador for Park Hill Collection, Rebollo helps set the stage for buyer-seller interaction with his inspiring showroom designs. Rebollo spoke with Home Accents Today about how he got his start at Michaels, how initially failing as a floral designer actually helped his career, and how to best decorate a Christmas tree.

You worked for Michaels for nearly 20 years, as a floral designer and later in product development. How did you get your start in that business?

I needed to get a part-time job when I was in high school. I was a longtime customer of Michaels as a kid and thought it would be a good fit for me, but I had to wait to be working age. I started pushing carts and moved to the cash register and by the time I graduated high school, I was hired full-time as a lead sales associate. Within a few months I had my first shot at being a floral designer. I failed miserably. I was very inexperienced. [But] I kept growing into more supervisory roles, and I continued to practice my craft and grow and get better at it. I was given a second chance at being a designer for the company at its San Diego location and had a successful run the second time around. The next challenge was turning around the framing department as the custom framing manager for that store. I had the highest sales for the framing department in the San Diego district. That eventually led me to the corporate office to fill in on product development for the floral department for pre-mades. Before I knew it, I was on my way to China for the first time in my life. I was paired with my then colleague who became my director, and she showed me the ropes. I learned about trend guides, how to translate them into product, how to come up with a good ratio of traditional versus trend, what that meant for us as a company and how that translated to 1,500 stores. I did that for two years as an assistant store manager — I would get pulled out to go on these trips to develop products. When my colleague got promoted, she wanted me to be the designer for the program. At that point I went from having a job to having a career. I had zero friends out here [in Texas, Michaels’ corporate office]. I started volunteering to decorate the Christmas tree in the lobby. I was trying to find my place, going from a big fish in a small pond back to being a small fish. The program peaked; it was a $55 million handcrafted floral program. If you walked into Michaels and you wanted the wreath that didn’t look like the 10 wreaths behind it, that’s what I was developing. That was the peak of me going from pushing carts to being the main floral designer. It was supposed to be a part-time high school job but it wound up becoming a career.

What are some of the most important lessons you took from that job?

I’ve always tried to make the best of every situation and learn something every day. Don’t ever think that you are at the top and you are the best you can be, because that’s the day you stop improving. I will always strive to be a better version of myself.

You recently transitioned into visual merchandising and showroom design at Park Hill.

When I moved over [the job started as a one-week freelance project], I was still decorating trees, but it was very different from what I was used to. It had to be very elevated, very clean. It was a huge growing exercise for me. Was I going to be good enough to decorate trees in a showroom seen by thousands? Would it impact in a positive way? My good friend once told me that being comfortably uncomfortable was the best place to be. I had to make sure I did my best. I am very grateful that I was able to grow and learn once again.

What goes into a successful retail holiday display? Is there anything retailers should avoid doing?

I think something that is well thought out and given love is always going to be the shining star. It’s always going to create a special moment and get that ‘wow’ from people who view it. I think rushing things is the biggest mistake for me. I like to think things through. Disney’s Imagineers inspire me. They put all this thought into this end visual display that all the guests get to see. That’s how I take on each project, whether it’s decorating a tree or hosting a Halloween party. It’s about creating an environment. The biggest highlight and best moment is when for a split second someone walks into the room and says ‘wow.’ That makes anything I do successful.

You are about to decorate a tree. Break the process down for us.

I have to first understand the environment the tree is going to be in. I like to know the surroundings. Do you want it to be traditional—red, green, gold— or live in the ambiance of the space? Once I understand that, I pick all my themes, but I won’t start until I fluff the tree up. I don’t think people take the time to fluff the tree— I can tell when something is rushed. Getting that tree in the best shape is the best starting point. Another important thing is the lights. In telling the story of a tree I determine if there is a color that needs to be incorporated into it. Once that’s done, I add in big focal items. I like putting oversized things in the tree; they tend to tell a story. For example, when we did the tree for Busy Philipps, I knew she liked nutcrackers, so I placed nutcrackers that you would have on your table into her tree. From there I move on to large ornaments, going by size, largest to smallest. I like to leave the heirlooms or collectibles to the very end. Those are the special pieces handed down from generation to generation, and those are the pieces you want seen on the tree. I’m all about layering—tucking some ornaments into the tree, not hanging everything on the outermost tip. Layering things in will start giving you your backdrop. Go in and start working your way out. The baubles are your backdrop and help your heirlooms stand out.

What are some of the notable trends in holiday decorating this year?

Trends go in a circle. What is in today is out tomorrow. I continue to see playful nods to vintage. I mean twisting things with a whimsical aspect. Animal print is also something I continue to see. It’s not a huge peak but it’s still there, so why don’t we incorporate a few leopard ornaments or a leopard tree skirt? Pastels also seem to be pretty strong for Christmas. You go into people’s home for the holidays and you see a lot of traditional trees. I try to push the people around me to take a trend and incorporate it into what they already have. If you have a traditional red and gold tree, pop a leopard ornament in there. And if you don’t like it, don’t do it again, move on. Holiday decorating is also very personal and can be nostalgic to many. Though as a designer, I love to present trend in my design projects, I also love a classic and traditional style. It will always be timeless.

At a Glance:
Where did you grow up?
In the beautiful sunny city of San Diego, Calif. I miss it; I took my daily ocean view drive for granted.

How did you earn your first paycheck?
My first paycheck came from my afterschool job at Michaels Arts and Crafts, pushing carts, cashiering, and putting away all those “go-backs” we shoppers love to leave around. However, I was always trying to make a buck as a kid making and selling little craft projects or helping my parents at their bakery and restaurant.

What’s one thing you wish you could do better?
Decorate holiday treats that are homemade. I’m fascinated with all those Instagrammable cookies and desserts. I need to find the time to practice or take a cookie decorating workshop.

Favorite holiday song?
“Rockin’ Around the Christmas Tree” — the Brenda Lee version. My mom and I blast this song and have pumpkin pie as I decorate my parents’ Christmas tree.

Best holiday gift you’ve received in the past five years?
The Batmobile that I didn’t get as a kid that my parents gave me for my small Batman collection a couple of years ago. I know this is going to sound so cliché but really, the best gift has been to have the ability and means to come home to my parents every Christmas.

Best holiday gift you’ve given in the past five years?
My dad had a Dallas Cowboys cap I bought for him when I attended my first Cowboys game after moving to Dallas; he took it to get professionally cleaned last December and they ruined it. He had worn it every day since I gave it to him. I had two days to replace it before I flew home but the stadium shop was closed every time I attempted to get there. My best friend ultimately got a new hat and an official Cowboys jacket and overnighted it to me in San Diego. My dad cried on Christmas morning when he opened it up.