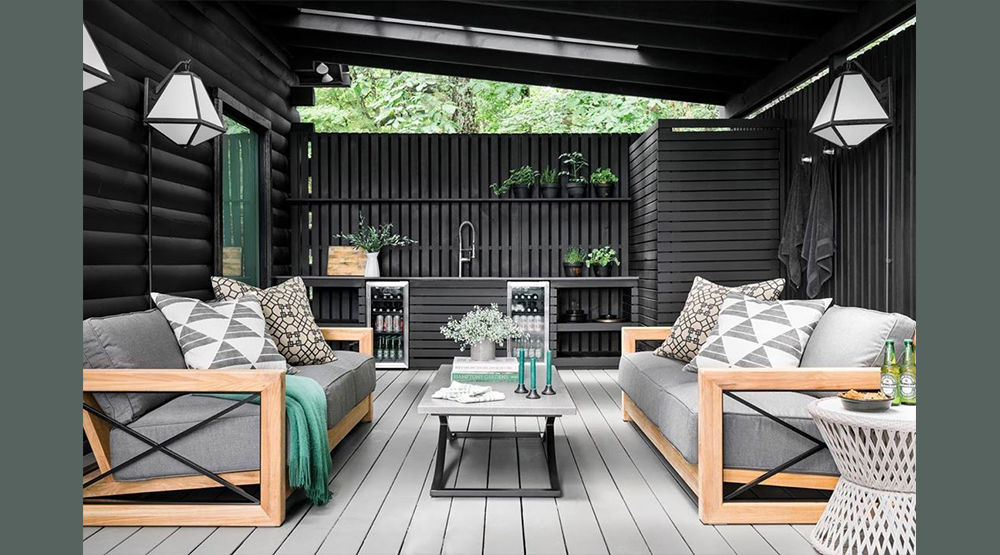 Outdoor lighting will continue to grow. Shown in this outdoor setting is Brian Patrick Flynn’s Glacier pendant for Crystorama.

Rooms did double — or triple—duty during the pandemic, when people worked, worked out and performed other activities in the same room. Not only is that trend here to stay, but other shifts in home design — such as homes with two offices or primary bedroom suites, for example — were discussed during the American Lighting Association’s virtual symposium early in November.

The future will see less decorative lighting because more lighting will be built into a space, such as a tray ceiling or cove, said lighting expert Jeff Dross of Lighting by Jeffrey in his presentation, “Changes in Residential Architecture that will Impact Lighting. “There will be more lighting product in a house — you just won’t see it.”

One of the reasons for this comes from the rise of movable walls and room dividers, as people create separate — and sometimes temporary — spaces, particularly during the pandemic. So the lighting for these spaces has to be considered, he said. A hanging fixture, for example, will be problematic if it is in the way of a movable wall, and lighting for all areas of the space, regardless of the position of the walls and dividers, has to be thought out in multiple configurations, said Dross. “We’ll see a demand for more functional footage.”

Single-purpose rooms are on the decline, Dross said. And while experts are split on the future of the open floor plan (though having a kitchen connected to a communal living space will remain popular), people want more private or semi-private spaces. The functions of a room will impact the lighting. For example, a craft room will require more lighting than a yoga room. Quiet rooms — for meditation or prayer — are on the rise and can also function as a place for people with autism, Asperger’s or ADHD to decompress (for which neutral palettes and LED lights with virtually no flicker should be used; avoid above recessed cans, which can be distracting, Dross said.)

Now that home offices have become a must-have for many people, they will become more elevated and thought out than before.

If both spouses or partners work at home or kids go to school virtually, the home might even require two or more home offices. When video conferencing from a home office, Dross recommended that lighting should be placed at the side so there’s no screen glare, or from the front at a 45-degree angle — but it absolutely should not come from behind the person. Desk lighting should also be included for non-computer work, he added.

More homes with multiple primary bedroom suites are also on the rise, Dross said. Perhaps the home is being used by in-laws or other generations, two families buying a home together to save money, or a married couple who wants to sleep in different rooms. These homes are also seeing a higher resale value, he added.

The kitchen remains the heart of the home, and Dross cited a National Association of Home Builders survey which found that it will be the only room that will increase in size. With more open shelving rather than upper cabinets in this room, under cabinet lighting may not work anymore, resulting in rethinking the lighting, using sconces or LED tape light instead.

Like home offices, kitchen pantries are also becoming more elevated in their look, with better flooring and finishes — and lighting. Pantries are getting bigger to accommodate specialized cooking equipment and items that would traditionally be disappearing in upper cabinets.

Dross also addressed the aging population, for which glare is a problem. More solid-shade pendants are replacing glass shades in the kitchen to combat this, he said; he also recommended deeper recessed cans (2.5-3 inches deep) rather than surface-mounted recessed cans. If kitchens have different countertop heights to accommodate wheelchairs, that will also affect the lighting in that room, he added.

In the bathroom, sconces may be too high for someone in a wheelchair, so linear luminaries installed vertically work for both the seated and standing, as do mirrors that can be adjusted or installed on a tilt.

Companies should also be mindful of light switches, which can be challenging for people with dexterity issues. Dross encouraged the use of large toggle switches that can be operated by an elbow, hand or something else. The same with table lamps — a push-button or floor step for lamps may work better for some people. Or they can be add-ons, such as Ikea’s ThisAbles project, which offers items (some of which are 3-D printable) that allow people with special needs to better use Ikea products.

As people increase their use of technology and devices, homes will start seeing more tech/wiring/media closets to house those computer networks, security systems and hotspots in one place. And those rooms will require a lot of light, as well as a fan because electronics tend to get hot, Dross said.

The exterior of the home is a priority focus for homeowners as well — a NAHB survey found that outdoor lighting is one of the top 20 more desirable elements in a new home. That includes an increase of small dwellings separate from the home, for living or other activities, winter gardens or conservatories, and, in smaller lots, pocket gardens. In addition, outdoor technology will always grow, Dross added and includes audio, video and security.

Outdoor audio systems, he added, use the same type of wiring as landscape lighting, so it’s an easy add-on sale. From watching shows on an outdoor-rated television to barbecuing at night to even safely moving from the home’s interior to the exterior, these activities will have to be lit accordingly.

And then there’s climate change, for which more resilient lighting is needed, Dross said.

Most power grids were built in the 1950s and 1960s and are at full capacity, leading to more power failures. Americans experience an average of six hours of electricity disruptions a year, he said — North Carolina sees the most, at an average of 30 hours a year, followed by Vermont. Lighting that can still function in a power failure will only grow more important, and include solar lights and lighting with battery backups.

This article first appeared in the November issue of Home Accents Today.