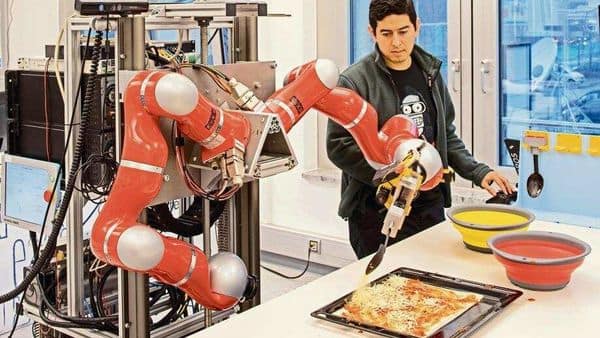 Ghost Kitchens, a cloud kitchen company, has invested in a series of automated products that has transformed the kitchen into a semi-automatic workspace. An automatic cooking station, and not human chefs, call the culinary shots.

Think of the automatic cooking station as a robot that can cook mouth-watering stuff with amazing consistency. It doesn’t have the robotic arms we see in manufacturing plants but instead, it features web-connected utensils, stoves and other appliances that can help with the cooking. The machines have recipes programmed and all a human does is select what needs to be cooked on a screen and feed the raw materials from a barrel. The robot does the rest.

Vegetables and meat are still cooked adequately; spices are added in proportion; aromatic biryanis are dished out in time. Rotis and flaky parathas are cooked at ideal temperatures and are briskly dropped on a plate in a few seconds from an e-pan; falafels and fries placed in a motorized basket automatically descend into a smart fryer; the quantity and temperature of the food are measured accurately all the time. Many orders, received online, are ready to be packaged and delivered within 10-15 minutes.

“Cooking is like choreographing a symphony. The timing, measures and coordination have to be perfect and consistent for an excellent and ephemeral experience for the consumer. And providing consistency of taste, quality and quantity across the outlets all the time is very challenging,” Karan Tanna, founder and chief executive officer (CEO) of Ghost Kitchens, said. “Automation helps us solve these to a great extent.”

Ghost Kitchens has 20 restaurants across Mumbai, Hyderabad and Pune. Four of its kitchens employ robotic and artificial intelligence (AI)-based equipment. “The bots are easy to use. After six weeks of handholding, my human chefs are ready to work with AI-powered machines,” Tanna added.

Tanna is just one of the many tech-preneurs who have found a taste for AI kitchens. The realization, like Tanna hints, is simple but profound. Even the best of chefs aren’t consistent. Robots, on the other hand, are both consistent and can work tirelessly. Human chefs take too many smoking breaks. Robots don’t. Human chefs can be unhygienic. Robots require cleaning but can cut down hygiene issues. And cooking at an industrial scale, unlike popular perception, is not really creative. It is a repeatable task and hence, the playground of automation.

In October this year, Rebel Foods achieved a billion-dollar valuation after raising $175 million in a funding round led by the sovereign wealth fund Qatar Investment Authority. The company now operates in more than 10 countries with around 4,000 ‘internet restaurants’ under 45-odd brand names.

Kitchen robotics, nevertheless, is still a nascent industry and work in progress. While robotic arms are not too common in Indian kitchens just yet, they are at play in many parts of the world. Fully automated robotic arms mimic the motions of human arms. Last December, London-based Moley Kitchen Robot unveiled the world’s first robot kitchen, promising that the robot “cooks from scratch and even cleans up afterwards without complaint”. The brainchild of Russian computer scientist Mark Oleynik, it promises to cook and serve standard meals at restaurants.

All this underlines a succinct fact: the future of cooking will be a lot different from what we see and experience now.

So, how large is the kitchen robotics market now?

An analysis from Grand View Research shows that the global smart kitchen market crossed $11 billion in 2020 and is expected to expand at a compounded annual growth rate (CAGR) of 18.6% during 2021-28. A report by ‘Markets and Markets’ notes that the global food robotics market size was valued at $1.9 billion in 2020 and could grow to $4 billion by 2026. That’s a CAGR of 13.1%.

Mass production of packaged food products, especially in countries such as the US, Japan, France and Italy, has driven the market for food robotics. In most large-scale food manufacturing plants, processes are being automated to ensure quality and consistency. China, too, had adopted mechanization in cooking with automated sauce dispensers and beverage brewers. Indian cuisine, with its complex cooking procedures and flavours, is a late entrant into the automation club. Covid-19 has accelerated its adoption.

“The pandemic has changed the food and beverage (F&B) industry and one of the most disruptive changes came with the growth of cloud kitchens,” Eshwar K Vikas, co-founder and CEO of Mukunda Foods, said. The company manufactures kitchen automation solutions.

“To scale and register revenue growth in this (restaurant) market, a company needs to be present in at least 20 locations in a city like Bengaluru or Chennai,” he added. That would require the hiring of many high-quality chefs, training of manpower in each of the locations. Not an easy task. “Also, there is a need to minimize the food preparation time to deliver quickly. These factors are driving the adoption of automation in cooking,” Vikas said.

Time taken to prepare meals, especially on weekdays, is a hassle in nearly every urban household. Some robot makers are clearly targeting the consumer market, albeit small right now. Bengaluru based Euphotic Labs, for instance, has developed Nosh, a cooking robot for domestic consumers.

“Cooking is one of the most time-consuming and laborious tasks. An average homemaker spends as much as 253 minutes per week in the kitchen cooking meals while a professional chef spends even more time than that. The automated robots could save you a whole lot of time,” Saravanan Sundaramoorthy, founder and CEO at RoboChef, said.

Launched in 2015, RoboChef is a Chennai-based company that makes kitchen robots. Its machines can cook more than 600 items—preloaded into the machine—60% faster than the manual method. Newer recipes can be fed to the robot chef while existing ones can be customized. “In a single run, it can cook for 1,000 servings,” Sundaramoorthy said.

As of now, the Indian restaurant industry, with more than 70 lakh restaurants in the organized category and above 2.3 crore restaurants in the unorganized sector, is turning out to be a big market for automation companies. Only less than 2% of the players have adopted automation in some form till date. This implies a long runway ahead. Many companies in the organized segment have plans to adopt some level of mechanization over the next couple of years, industry watchers said.

“We are trying to bring in a perfect mix of man and machine in our kitchens. Automated pizza making machines are next on the cards,” said Karan Tanna of Ghost Kitchens.

At the heart of a smart kitchen are many disruptive technologies. Machine learning, sensors, data analytics and computer vision are some of them.

Chaayos, a tea chain backed by Tiger Global, has automated its tea making process, across all its 127 outlets by introducing an IoT-enabled tea machine called Chai Monk. The bot accepts orders through an app, can make 80,000 permutations and combinations of the tea in less than two minutes, and has a point-of-sale integrated, connected to cloud. The machine is also enabled with facial recognition.

Users of Nosh can load raw materials such as water, oil and spices in separate boxes and punch in the name of the dish they want the robot to cook. With an AI backbone and a mobile app as its front-end, Nosh can cook one-pot dishes such as upma, matar paneer, and fish curry. It can even track the calories in a recipe.

Nosh’s machine is enabled with a smart camera that watches the cooking pan and can make real-time decisions. “It can check whether the onions have become translucent or golden brown or the tomato has mashed properly. It adjusts the time for adding other ingredients,” Yatin Varachhia, co-founder of Euphotic Labs, said. “Thus, the taste of the dish will never get compromised even if the quality of Vegetables change,” he added.

Apart from cooking, AI is also helping commercial kitchen operators in quality control and in optimizing the processes. “In our kitchen, we have a sensor-enabled quality check station to check for size, weight, appearance, temperature. The appearance part involves visual AI and image analytics,” Amit Kumar Gupta of Rebel Foods said.

The disruptive technologies raise a pertinent question. Like in manufacturing or even the services industries, will robots and bots steal jobs? If robots can cook with consistency, why do restaurants and cloud kitchens even need chefs?

Chefs, industry watchers said, won’t become obsolete. AI and robotics won’t replace them but will enhance their productivity and creativity. Newer menus and customization of menus will still be designed by humans. Second, the F&B industry is plagued with shortage of skilled workers and high attrition rates. Machines fit in well here. Third, a completely automated, human-less kitchen is still the stuff of science fiction. Machines have not entered the pre-cooking stage. And packaging and deliveries will remain the domain of humans for some time—unless, of course, the drone ecosystem matures faster than expected.

“When a chef creates a biryani or a noodle dish, the cloud kitchen owners want to replicate it across their branches. Machines come to the rescue here,” said Vikas of Mukunda Foods. The evidence is in the company’s sales. Mukunda Foods sold 600 units of its automated machines in 2020. But in the second quarter of the current financial year alone, the company sold more machines than in the whole of 2020.

Meanwhile, machines are challenging the chefs to enhance their skills and think out of the box—one way they can stay relevant in an increasingly automated world.

“Culinary power combined with technology has led us to create memorable brands. When we launched Faasos, we wanted our customers to relate to the brand with its taste and consistency. Hence, whether you have a wrap in Mumbai or Bengaluru, it will taste the same,” said Gupta of Rebel Foods. “Our team of chefs has built some of the most loved customer dishes. We believe technology allows chefs to recreate their dishes across geographies,” he added.

Industry experts calculated that with the right mix of men and machines, cloud kitchens can bring down the human resources cost by 15-20% and save around 7-10% in energy usage as robots optimize cooking. Adopting automation, however, is not always easy. Cloud kitchens face high upfront expenses. Machines from RoboChef, for instance, range between ₹6 lakh and ₹40 lakh. And lack of awareness among staff slows down the pace entrepreneurs expect.

But things are changing since customers, too, seem to love what robots make. In fact, most don’t realize that a non-human has cooked their meal. K. Malini, a Mumbai-based social worker, often orders from Badmash Biriyani, a Ghost Kitchens brand. When this writer mentioned the robo-chef, she received it with a mix of awe and disbelief.

“This is fantastic,” she said. “I didn’t even know that the Hyderabadi chicken biryani I had ordered was cooked by a robot. It was yummy.”