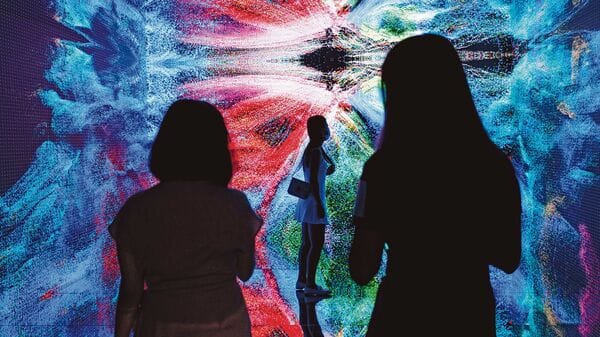 My first VR exercise was a boxing class that’s like “Dance Dance Revolution” for your hands. I punched color-coded targets zooming at my face and tilted to avoid swirling bars. After the session, I peeled the damp Meta Quest 2 (formerly known as Oculus) off my face—which is just as disgusting as it sounds. But there’s an upside: I couldn’t believe how hard my heart was pumping and how fast those 20 minutes flew by.

VR fitness isn’t just a gimmick. The headset turns a dreaded aspect of exercise (actually doing it) into an interactive game that makes you forget it’s a workout. That is, when it doesn’t give you motion sickness.

Fitness experts say virtual workouts, which largely involve squats and air punches, can be an effective way to burn calories. Most can be done in your living room, as long as there’s a clear area for hopping and arm flinging. Some require cardio equipment, such as an elliptical machine. However, you won’t find virtual workouts with much yoga, weight training or other dynamic movement that could pose a safety hazard. Wearing a headset is like having an electronic blindfold strapped to your face.

Supernatural was the most impressive of the VR workout apps I tried. It offers four types of classes: boxing, meditation, stretching and a high-intensity, rhythmic workout called Flow. The sensors in the Quest’s handheld controllers tell the app how fast and accurately you’re punching the flying orbs. The visuals are stunning. Workouts are set in expansive real-life landscapes captured by 360-degree cameras. I never thought I’d be working out in the Sahara. (The app’s creator, Within, recently entered into an agreement to be acquired by Facebook parent Meta Platforms Inc.)

FitXR takes a different approach. The environment is all digitally conjured, and instructors are Sims-esque avatars voiced by trainers. In the app’s cardio workouts, you side step or crouch down to punch airborne glass balls. The dance classes include body rolls and arm air pumps. I’m glad there are no mirrors in VR: I guarantee you my moves didn’t look as cool as I thought they did.

Like digital fitness platforms that run on phones and tablets, both VR apps require a subscription; the Meta Quest 2 headset starts at $299. The apps are pricey: a Supernatural membership for up to four people (sharing one device) costs $19 a month, or $180 a year. FitXR costs $10 a month for five profiles. Unlike on smartphone apps, workouts on the Quest 2 can’t be downloaded for offline use. Naturally, the headset requires a Facebook account.

The apps’ up-and-down and side-to-side movements and arm-raises are legitimate exercises, according to Jimmy Bagley, associate professor of exercise and muscle physiology at San Francisco State University. “You use a lot of muscle mass lunging and squatting,” he said.

“If you are a non-exerciser or beginning exerciser and want to lose some fat or gain some muscle, then you could do most of your workouts in VR now,” Dr. Bagley said. More serious athletes should stick with a real trainer in a real gym, he added.

A 2018 study by Dr. Bagley and other researchers found that VR exercise can be just as effective at increasing your calorie burn rate as treadmill running or cycling, depending on the intensity of the game. Subjects in a 2020 study by researchers at the University of Minnesota Duluth said they felt less tired or exhausted biking in VR, compared with traditional bike exercise.

I’m already a big fan of Zwift, an indoor biking app that runs on my iPad and controls my smart bike trainer’s resistance based on the virtual route’s elevation. Could a VR app be even better?

I tried out Holofit by Holodia ($10.75 a month), which works with Bluetooth-enabled ellipticals, rowers and stationary bikes. You can also use a traditional machine with a cadence sensor attached to your shoe. Holofit’s virtual worlds are programmed with absurd set pieces to keep you engaged. I passed an overturned bus on the Golden Gate Bridge, rode through a rock concert in the middle of Paris and flew out of a rocket ship onto Saturn’s rings.

This kind of cardio was a different beast in VR. The headset got steamy fast, and while biking on a straight road didn’t bother me, sharp turns and going uphill or downhill made my stomach flip. After 30 minutes, I was too nauseated to continue. This might be a unique issue: I have amblyopia, which means one eye doesn’t work as well as the other. Wearing glasses inside of the headset helps, but I still get headaches after long stints. (My colleague Joanna, who spent 24 hours in the metaverse, experienced similar symptoms after prolonged headset use.)

A Holofit spokesman said this feeling is common for new users and eventually dissipates. The company is continuing to refine the avatar’s in-game movements, he added. Holofit was fine otherwise, but it doesn’t have Zwift’s automatic resistance-adjustment features or detailed graphics.

I asked Zwift Chief Executive Officer Eric Min why the app isn’t in the metaverse yet. “Zwift does indeed have a build for VR, but it’s not something that’s publicly available,” he said. For now, a VR headset is too bulky for bikers, he said. “It’s weighty, hot, fogs up and the sweat consideration is significant.” He said the company also is concerned about user safety.

He’s right about the sweat. The Quest 2 engulfs half your face like a snorkel mask, trapping heat inside, and needs to be snug to stay put while you move around. After each workout, the face pad on my headset was drenched.

Meta acknowledges that the headset needs improvement for fitness: The company plans to sell new accessories, including an exercise-optimized facial interface that can be wiped down and grips that make the controllers easier to hold while you sweat.

To become mainstream fitness devices, headsets will need to be lighter, with even faster processors and more precise head-tracking to reduce motion sickness. They should also be able to track leg movements, which they don’t do currently.

New devices are imminent. Meta says it plans to expand its Quest offerings later this year with more advanced hardware. And Apple’s anticipated smart glasses are expected to feature augmented-reality technology. Perhaps a virtual fitness instructor could appear overlaid in the real world.

For now, the experience is great for early adopters who are bored with their exercise routine—and willing to navigate a novel, complex interface. Before beginning a VR fitness journey, however, there are two things you will definitely need: a silicone face-cushion cover for your Quest 2 headset, plus a good old-fashioned sweatband. Trust me.